ABA English, the digital English academy with millions of students around the world, launched today its redesigned brand and new campaign First, learn English.  The digital language school has modernized its logo and overall brand aesthetics to better attune the design to mobile devices.

Mobile-learning through smartphones and other devices is a strongly growing trend, and likely to predominate soon. According to ABA English’s latest m-learning research, 67% of global students use their language learning apps several times per week, and 26% once or several times a day.

With this in perspective, ABA English’s brand image was redesigned to deliver a minimalist look and feel, well-suited to all types of screens, with a fresh, neat and balanced style. The renovated image underscores the brand’s personality and visual essence, focusing on the academic and digital positioning that sets it apart from other language learning platforms.

The new international growth stage that ABA English recently entered has accelerated its branding restage, represented most visually by the redesigned logotype.

The new ABA English logo fuses the brand’s academic and digital nature, two key hallmarks of this online school that defines itself as The Digital English Academy. The icon’s accent is on simplicity: the letter “A” in strong strokes and preserving the original logo’s typography, accompanied by a fluorescent blue dot that synthesizes the academy’s other brand identity elements.

“We wanted a logo that worked perfectly as a stand-alone icon but that would also represent our corporate values. With the restage we simplified the logo to gain usability and recognition, creating an academic symbol in a powerful and readable typography,” stated Jaume Baixas, Creative manager at ABA English.

ABA English has launched its brand restage jointly with a humorous campaigncalled First, learn English. Created for social media and digital channels, the campaign protagonist is a regular guy who discovers he must learn English to handle situations that are potentially embarrassing.

For example, the sketches show the character speaking in public or holding a press conference with international media. In other stories the protagonist is aghast to discover that what he got tattooed on his arm or printed on his t-shirt was not quite the intention. In one of the funniest sketches the actor is trying to turn off the lights in his smart-home, but using unintelligible English. 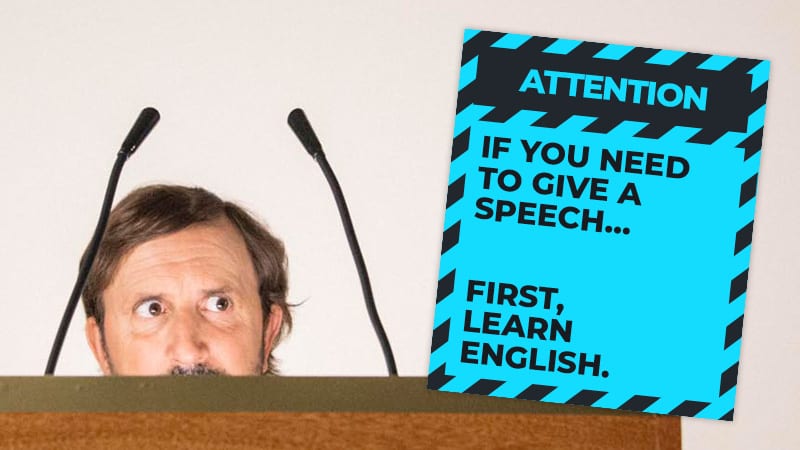 The campaign has been launched simultaneously in 15 countries and 6 languages(English, French, Italian, Portuguese, Russian and Spanish) and consists of short and long videos, banners and other creatives adapted to digital channels.

For further information on the campaign, please view the various First, learn Englishsketches in these links: